Meet Panda, our Landseer Newfoundland. OMG, he is so sweet!
Panda (born 8/2/2014) came to us in January of 2021, two weeks before Vasco joined us. He's one hell of a great dog and big brother to Vasco. Our family elected, in 2020, to be Humane Society of Seattle foster parents and we swore that we'd never let ourselves fall too much in love with any animal we took in so that we could find them permanent homes and be happy for them. Yeah, that went wayyyy out the door within 5 minutes of meeting this gentle giant. I looked at Erika, my wife, and said 'you know he's never leaving here, right?' and she looked back at me and said 'I agree. I knew you were going to say that.' He weighs in between 115-120 lbs. and is so incredibly strong. I challenge you to take him for a walk and try to pull him back when he sees another dog. He is so social.

A Landseer Newfoundland is a more rare breed of Newfoundland that is a livestock guardian and water dog that fisherman used to bring on boats with them. They were more popular than the all black variation of Newfoundlands back in the Victorian era but that changed in the 20th century.

He's officially adopted and we're in love with him!
Meet our newest mascot, Xeno (Xenoscho Carallsa), all the way from Praque!
Xeno (born 6/30/2021) is a Bernese Mountain Dog puppy, to the core. Energetic, playful and a sweetheart. Our breeder from the Czech Republic named him, as he was part of her X litter. His full name translates to 'friendly foreigner'.

My daughter flew down to San Francisco on October 1st, 2021 and intercepted him from customs on her own (wife was working) and surprised me that night. We found an amazing breeder that would let us breed him and show him, which we are going to do. The vet tells us he's going to be 140+ lbs. At 15 weeks he already weighed in at over 40 lbs.

He is beyond soft and cuddly. An amazing gentle giant of a teddy bear. I call him Meatball. 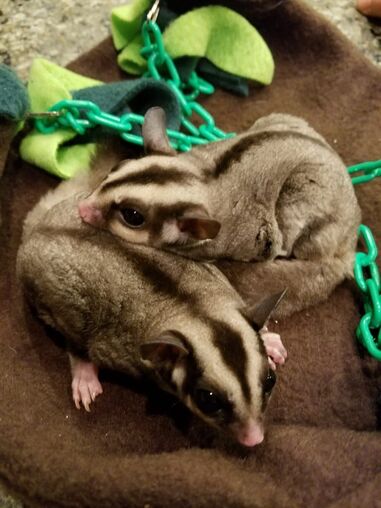 For years I told my wife that I wanted a 'souvenir monkey' every time we went somewhere tropical, to no avail. So, she caved....a little, and we ended up getting somewhat exotic pets, two sugar gliders, Kiwi (top) and Rocky (bottom). They're nocturnal Australian marsupials, essentially gliding possums, (same family as a koala bear and kangaroo) and sleep between about 8 AM and 6 PM and then wake up very playful and ready to go. Here's a link to what sugar gliders are for those of you that want to know; https://en.wikipedia.org/wiki/Sugar_glider. They're a ton of fun, climb on you, come with you in pouches or in your pocket when you're on the go, are extremely social, bark at night when they're bored (sounds like a chihuahua) and interact with you all the time. They live 12-15 years and have roughly the intelligence of a dog.